Stardust (2012) - performance in collaboration with Camilo Colmenares at openlab of KHM Rundgang 2012, Köln.

Based on the science fiction novel Return From The Stars by Stanislaw Lem, the performance introduces the concept of "betrization", loosely interpretable as salvation by cybernetics, it combines literary, philosophical, and empirical investigations of alienation and dystopia.

"[...] a tragic vision of a technologically splendid society which surrenders its own freedom to intellectronic nano-machines in order to put an end to the menace that it harbours within itself. The wide-ranging measures of social order and security on the alien planet recall the 'soft' totalitarianism of Return from the Stars (1961), even though for the first time Lem seems to consider the suppression of one's individuality a lesser evil than the perennial and all-too-real drive to aggression. The beast within, which was previously confined to the range of primitive clubs, slings, spears, or arrows, can now be released to sow death on the planetary—or, as Fiasco illustrates, even interplanetary—scale."
A Stanislaw Lem Reader - Stanislaw Lem, Peter Swirski 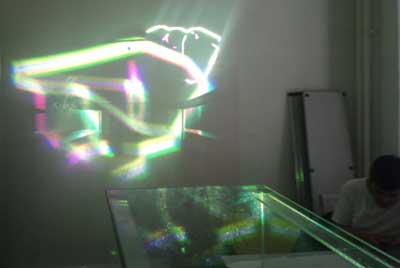