Point in mathematics is an accepted undefined. Point and line are two fundamental undefined concepts in geometry upon which many other concepts may be defined. So the point of mathematics is undefined right in its beginning in Greece. For Greeks geometry was an unsurpassed intellectual exercise which is ideal, immaterial and eternal. They were not interested in what a line might represent, but the line in itself was the matter of their arguments. Similarly when they model or draw objects, which may themselves have images in shadows or water, they use them in turn as images, endeavoring to see those absolute objects which cannot be seen otherwise by thought.
This makes it an interesting element to work the space. For this reason I am using laser to come close to a physical possibility of the mathematical notion of point. A projected Laser beam may embody here the convergence of ideas and ideals of ancient geometry, Illuminationist philosophy and high tech optics.

A laser pointer (shooting at the center of the frame) or a laser line (shooting vertical or horizontal to the frame) attached firmly to the body of a camera, so that the laser always points at the center of the field of view during the recording. The camera moves and explores slowly in a darkened room and it scans the objects in the room. The laser precisely hits the space and the architecture of the room is slowly revealed and transformed by the camera's perspective. 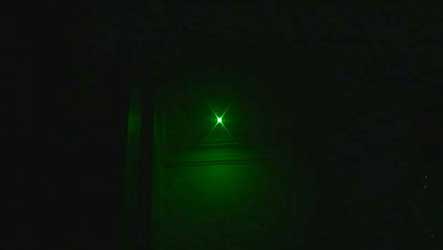