Short film based on an ancient Persian text. The story is an excerpt from Ajayibnamah: Aja'ib al-makhluqat wa ghara'ib al-mawjudat (عجائب المخلوقات و غرائب الموجودات, meaning: Marvels of creatures and Strange things existing) by Muhammad ibn-Mahmoud Hamdani (محمد ابن محمود همدانی), written in 1375. The story narrates the sending of a condemned criminal into a deep hole on top of the mountain to rescue a fallen child. The story ends absurdly with him hanging after days of floating downward in darkness. The book is probably the earliest work of cosmography (an ancient science that maps the general features of the cosmos or universe, describing both heaven and earth). The music of the piece is a modification of Tartuffe (Murnau 1925) film soundtrack. Images are computer generated. The three constitutive components of the film (image, sound & text) are all found, from radically different times and sources; German expressionist cinema, ancient Persian cosmology and the language of abstract digital. The images are result of a 3D simulation, studies in digital animation and problems in rendering algorithm. The abstract forms of the computer generated animation in black and white work with the verticality of his movement and the observatory state of his task in the story. He is sent down to look in darkness and horror of a never ending deepness, to find the child or truth, or for mere curiosity.

TEXT:
on the mountain of Esfahan there is a hole, it's depths can not be seen.
a child fell in it. in time of Isaac Simjuri.
and he was king. dismal he became.
and his mother anguished.
he took a prisoner sentenced to death and put him in a basket and sent in, to pull out after seven days.
seven days he went in and he had a pebble in the basket, threw it and three days and nights he listened no sound.
and they pull him out.
"what did you see?" they asked.
"darkness" he replied. 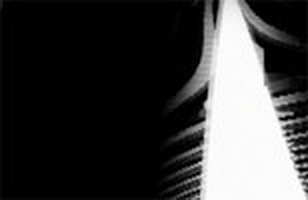