The mathematical framework of 'Cellular automaton' (discovered in 1940s) is a generative modular system suited for drawing in discrete spaces. It is an example of evolutionary computation, where through iterations within the system, simple rules and conditions can result into immense complexities and irregular behaviors.
By programming inside a framework of a 3D application and letting the computer to generate the space, I was able to look into the mathematics, move around in this computational universe and discover unexpected and new structures. The initial exploration was written within the virtual environment, and later exported selected buildings were cut out with laser and constructed together.

Cellular automata are simple mathematical principles. They consist of a lattice of discrete identical sites, each site taking on a finite set of values. The values of the sites evolve in discrete time steps according to deterministic rules that specify the value of each site in terms of the values of neighbouring sites.
Cellular automata may thus be considered as discrete idealizations of the partial differential equations often used to describe natural systems. Their discrete nature also allows an important analogy with digital computers: cellular automata may be viewed as parallel-processing computers of simple construction. One of the most fundamental properties of a cellular automaton is the type of grid on which it is computed. Cellular automata may also be constructed on Cartesian grids in arbitrary numbers of dimensions (described by Stephen Wolfram). The evolution of a two-dimensional cellular automaton can be made by starting with the initial state in the first row (generation zero), the first generation on the second row, and so on. This can be extended in three dimensions. To generate closed shapes, neighbouring sites with certain values are connected to each other. Next in order to have upstanding constructions, selections from the whole network of connections are clustered in perpendicular columns and put together like sections of a building. This forms a portion of the evolution of the initial formula of a cellular automaton in space. 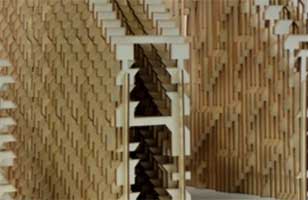